Kamala Award for Outstanding Contribution towards the Revival of Languishing Crafts

The Crafts Council of India adds a special award to recognise and honour an eminent artisan for his Outstanding Contribution towards the Revival of Languishing Crafts. This award carries a Cash prize of Rs.10,000/-, a Medal, an Angavastram, Citation and a Certificate.

The recipient of the Kamala Award for Outstanding Contribution towards the Revival of Languishing Crafts for 2019 is Shri. S.P.Mookkaiya from Karaikudi, Tamil Nadu, for reviving Chettinad Egg Plaster Work.

Shri. S.P.Mookkaiya learnt the craft of Chettinad egg plastering from Shri. N. Ponniah, a highly skilled mason from Chettinad and one of the few hereditary craftsmen who knew this technique. This ancient technique is on the verge of extinction and even building masons in Chettinad today are generally from the North East of India or Bihar. As a helper under Shri. N. Ponniah, Mookkaiya learnt the nuances of the craft before establishing his own unit. He has been in the field for 25 years now. Chettinad lime plaster or egg plaster was used in the interior of every Chettinad house as a practical as well as decorative solution to beat the heat. Laid in five coats and laboriously polished to a mirror-like state, this plaster has only a miniscule number of skilled masons left to continue its survival.

The M.Rm.Rm Cultural Foundation has held a practical workshop wherein fifteen masons from all over India including Shri. Mookkaiya participated and learnt the technique from a master craftsman. It is hoped that the ensuing documentation of the materials used and the process involved will ensure that this craft is not lost to future generations. The process of plastering in the traditional technique is very time consuming and it takes Shri. Mookkaiya and his team of six helpers five days to complete a wall measuring 100 sq.ft. Shri. Mookkaiya’s impeccable egg plastering can be seen in many homes and hotels in Chettinad, Karaikudi, Athangudi and Aryakudi. Shri. Mookkaiya has provided training on the unique time plaster process to more than forty people so far and has trained his two sons in the craft. Today, his sons assist him as helpers and he hopes that they will help sustain and carry forward the craft.

The Crafts Council of India has great pleasure in conferring the Kamala Award for Revival of Languishing Crafts on Shri. S.P. Mookkaiya for the year 2019. 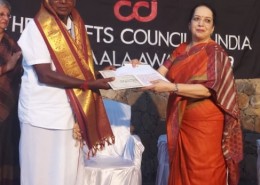 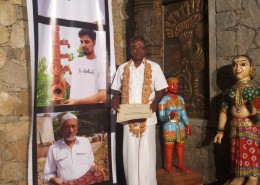 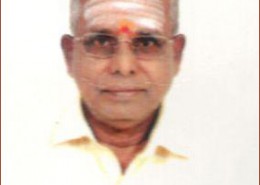